LAS VEGAS, Nev. — While there are indeed a multitude of reasons the U.S. Open is one of the defining tournaments of any bass fishing circuit, anywhere in the world, the focal point of the US Open, and that which truly separates anglers from champions, is the tournament’s three-day format on what is arguably one of the toughest fisheries in the country, Lake Mead. Well, true to form, this year’s Open went down to the wire and Rusty Brown from Tustin, CA came out as victor when the dust settled. Among many of the best anglers in the world like Rick Clunn, Aaron Martems, Gary Dobyns, Brett Hite, Morizu Shimizu and John Murray just to name a few were Southern California anglers Randy Estrada and Tim Irwin.

Randy and Tim did extremely well at this years 2013 WON Bass US Open. On day two after weighing a great sack of fish the tournament announcer put the microphone in Dr Randy’s face asking him a few questions about his day. Up on the stage in front of the press and huge crowd Randy answered with, “I would like to say hello to all the members from my bass club the California Bass Contenders”. What a great thing to say on such a huge stage with hundreds of thousands watching live and on webcast from all around the country and the world. Randy and Tim your Bass Contender brothers are proud of your awesome achievements and outstanding finish in this years 2013 WON Bass US Open.

Looking at the top 10 or even top 20 any experienced statistician would be hard pressed to create legitimate odds for who is most likely to emerge the victor in a tournament of this magnitude. There’s just so much opportunity for astronomical success or catastrophic failure. A gargantuan leap at Mead is entirely within the realm of possibility; however, a placement plummet is just as likely. But that’s how it goes in this tournament; that’s the appeal. You don’t have to be a seasoned pro or household name to step up and beat the best of the best. Sure, it’s going to take three days of 5-fish limits and your chances of success are exponentially higher if those limits are near the 10 pound range. But as you can see from the leaderboard, continually improving upon what may have initially seemed to be a sub-par day on the water is just as likely to create a champion as anything else.

With Randy and Tim meeting up for a little bit of prefish explration they were all serious and focused while on the water. After each prefish day they had time to relax and enjoy Las Vegas as you can see from Randy’s three good keepers below. This would not be the case once the event started as then it was all about fishing and focusing on your plan. Our own “Pops” Colgan made his way up to the Open as he does every year and spent time with Randy and Tim pictured below. 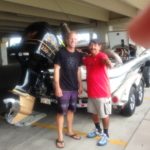 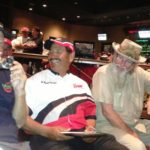 I had the chance to speak with Bass Contender brother Randy Estrada during and after the tournament. Randy is no stranger to the US Open with a win under his belt in 2006 as the AAA WON Bass US Open Champion. Randy also placed fourth in 2009 fishing as a Pro beating most of the best fisherman in the world. Randy pre-fished for a week leading up to this years event as he went out looking for new water and visiting familiar water from previous tournaments. Randy said the key to doing well at these events is consistency and making sure you make every bite count. He said one pound can easily gain you 10 to 15 places on the leaderboard or just as easy drop you just as far.

On day one Randy weighed in a very respectable 8.38lbs shooting him up to 26th place on the leaderboard out of 150 pro’s. On day two with 7.58lbs Randy stayed consistent and was able to keep his edge on the other pro’s while on the water winds were gusting to over 50mph. This kept him in the hunt and within striking distance. After day three and 8.15lbs Randy finished 23rd overall and only 2lbs from the top ten. Randy primarily fished EchoBay and Temple Bar. Congratulations Randy on phenomenal tournament and finish.

Hailing out of San Dimas, CA 2013 AAA WON Bass US Open competitor Tim Irwin fished his first ever US Open and almost bested the entire field of 150 AAA anglers from all over the country. Tim was blown away by the size and magnitude of an event like this. He also came down early to pre-fish as he figured out how to catch ‘em pretty good on a body of water that was a stingy as any other in the country. On day one Tim caught all five fish weighed in by his pro for 5.33lbs. They traveled over 80 miles back and forth to and from Las Vegas wash claiming 93rd place on the leaderboard. On day two Tim’s pro partner came off a difficult one fish day for 0.98lbs. His day two pro let Tim call the shots, so shot caller Tim directed the team and off they went. On their first stop they had a five fish limit in the first 20 minutes catching fish on top water and jigs. It was a day that Tim will never forget coming in with second largest bag of the entire tournament for day two with 11.18lbs only a couple of ounces from the big bag brought in by So Cal pro and good friend of the club Joe Uribe Jr from Anglers Marine. Tim finished the day gaining 75 places in the leaderboard up to 18th place just like that. After another stellar day on day three Tim was again able to fish his spots and lead his pro to 9.76lbs giving Tim a seventh place finish overall and $1600.00 pay day which was icing on the cake.

Tim is hooked and is already looking forward to next years event. Tim had the opportunity to hang out with Aaron Martens and spend some great conversation a few different times. Sure they talked a little bit about fishing but for the most part they talked about regular ol stuff that had nothing to do with the sport we love. Tim met so many other cool people like Dobyns and a whole host of the best anglers in the country. His experience both on and off the water is something he will never forget.

Thank you Randy and Tim for allowing us Bass Contender brothers to live a little bit of your experience while we are all here at home rooting for you all the way. We all look forward to hearing more when we see you soon on the Bass Contender ciruit. Randy and Tim sound off below and write a reply about your experience at the US Open. We would love to hear your comments. Bass contenders you can also write your comments below by simply filling out your name and email address and posting your reply.