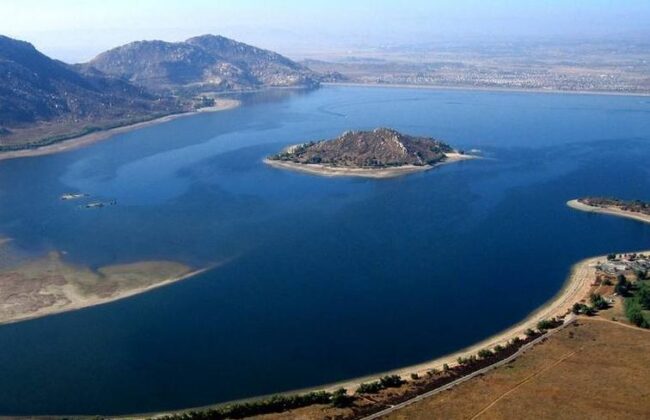 Lake opens at 6am

Weight in 3pm.  Location to be determined the morning of the tournament.

This is a NON-LOCAL LAKE, please refer to the tournament rules for fee details, plus half the gate and launching fees

Non boater anglers must contact their boating partner to confirm participation and arrange travel details no later than the Sunday before the tournament.

Lake opens a 1/2 hour before sunrise

6 hour tournament, weigh-in at 1pm in the parking lot

All lake rules, off limits, and speed rules apply

Good Luck!  Please do not be in a rush at the weigh in. 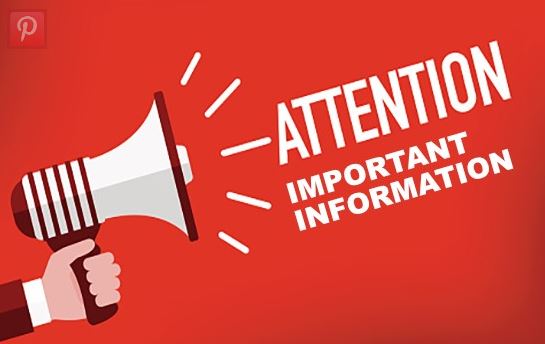 Reminder the next weeks club meeting will discuss the following:

Please make every effort to attend.

Now for the fun stuff…..

DVL, “the Jewel of the IE”, for some and an empty coal mine to others.  With some during the week changes to the line up, we managed to get all of our anglers on boats and on the water.  We had a team run into some issues and weren’t able to make it, but we did see 3 new smiley faces.  We had Eddie, a boater, fishing with Tom C, Sherman fishing with Frank/Dean, and Thomas fishing with Kevin/Raul.  They all caught fish!

With unexpected cloudy weather, we were able to fish without melting, which was great.  The water was low, the ramp was limited to 2 boats at a time, and the walk felt extra long up and down the ramp, but it all worked out with minimal delays.

Fishing was tough for some teams, our team’s 3 fish wouldn’t have made 12″ if we laid them together and stepped on them. But, not to worry, some guys caught diamonds and not small bags of coal.  The 1pm weigh-in saw multiple teams bring bags with a fish to be weighed for Big Fish honors, but there was only 1 limit.  Big Fish weights started at 2+, then 3+, then 4+, only to be topped by a 6.48 kicker for Steve M.  DANG!  That fish, and some chubby others helped team Steve and Alfred  take first place with 4 fish weighing a healthy 15.19.  They were closely challenged by team Jr and Pops with the only 5 fish limit that went for 12.22.  The last podium spot went to Eddie and Tom with 2 fish for 7.66.

Thanks to everyone for making the day awesome and can’t wait for next month!  Hope to see the new faces again and great job catching fish! 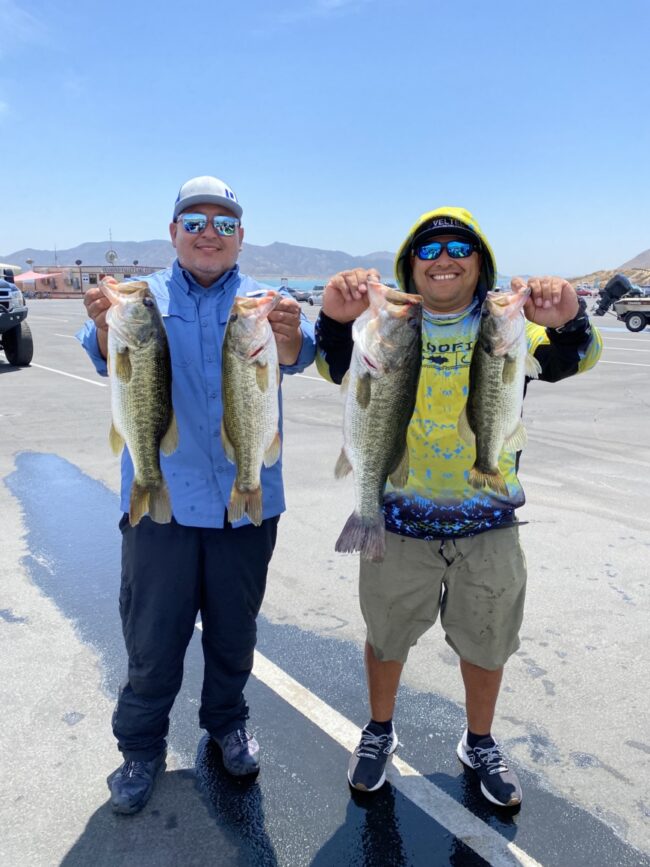 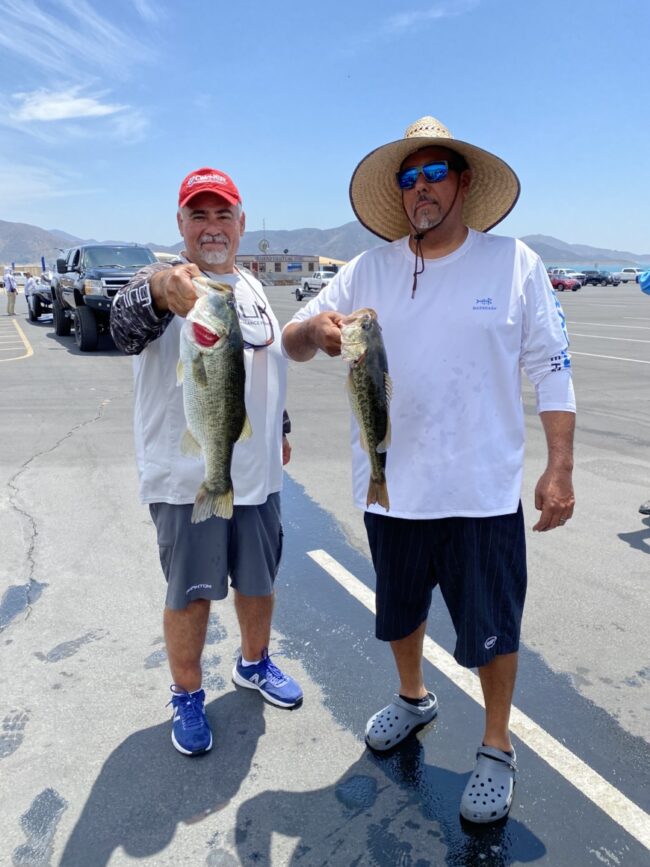 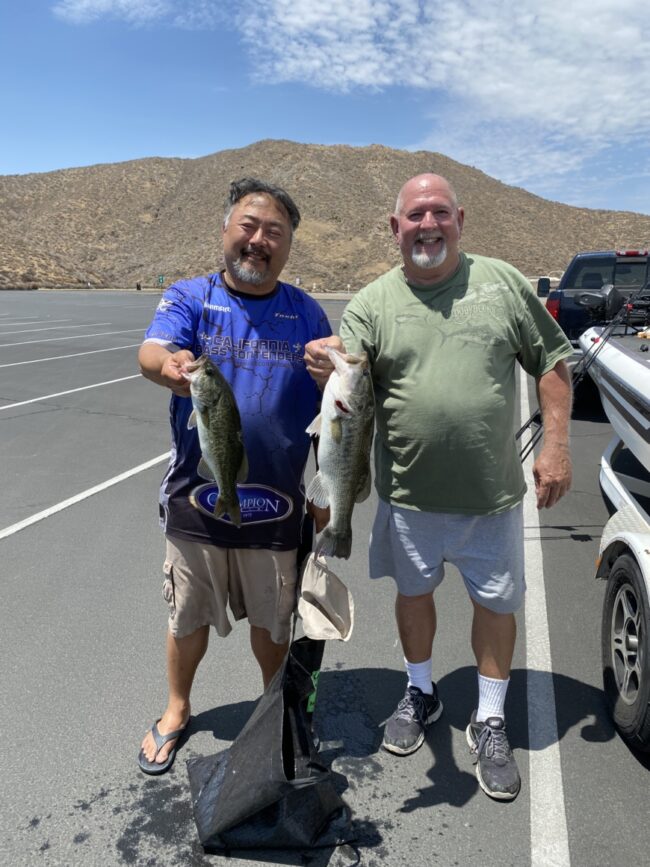 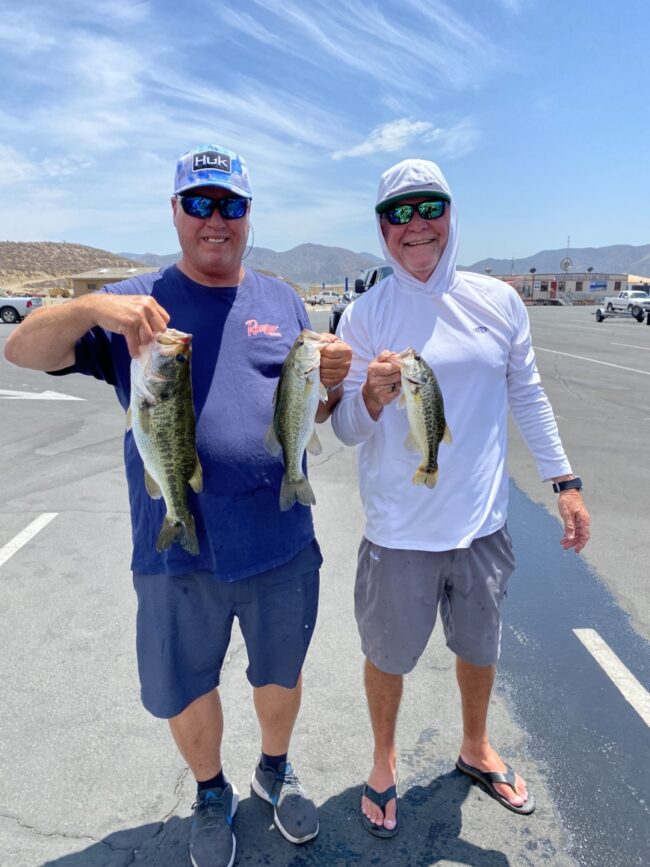 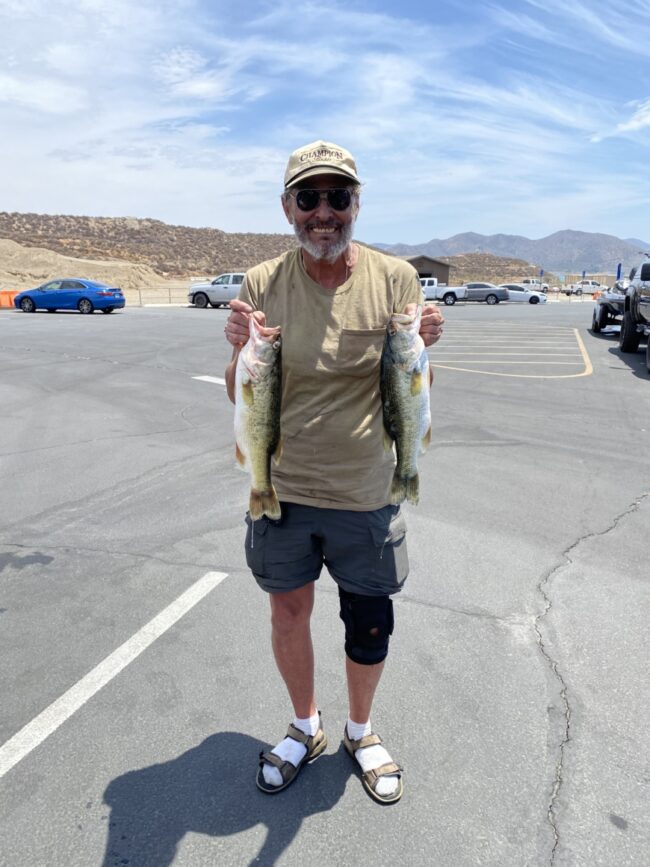 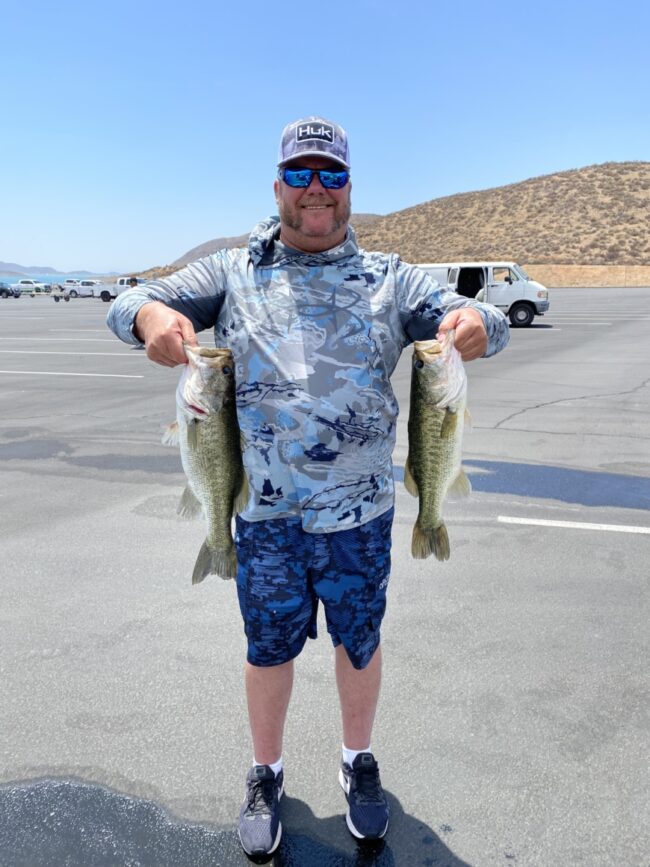 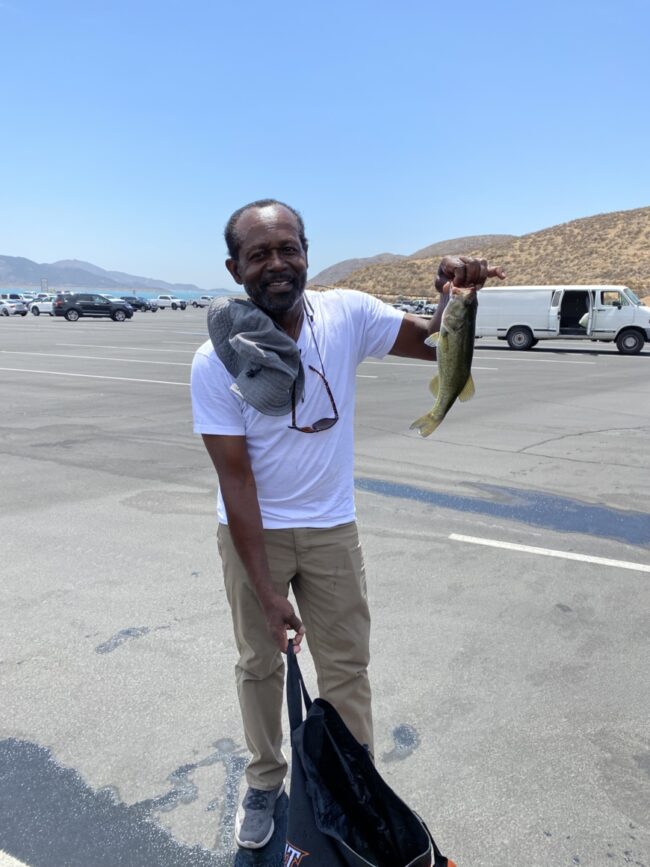 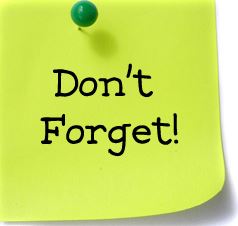 Hope everyone is ready to make that long, steep, July HOT walk up the DVL launch ramp!

Please note that the July night DVL tournament has been changed to a DAY tournament.

6hr tournament.  Weigh-in at 1pm in the parking lot.

Again, please do not be in a rush and we need your pictures.

Launch and go in order of the draw.

All lake rules and restrictions apply

This is a Team format tournament

Local lake fees apply, plus half the gate

The CBC June tournament had changed locations due to the recent closure of Lake Hodges.  The new location is Lake Skinner. 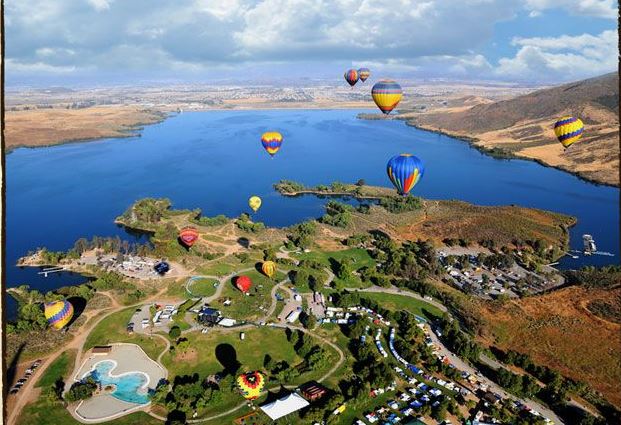 This is a 6hr team format tournament.

Weigh-in at 1pm in the parking lot.

Gate opens at 6am

Please do not be in a rush at the weigh-in.

Launch in order of the draw. 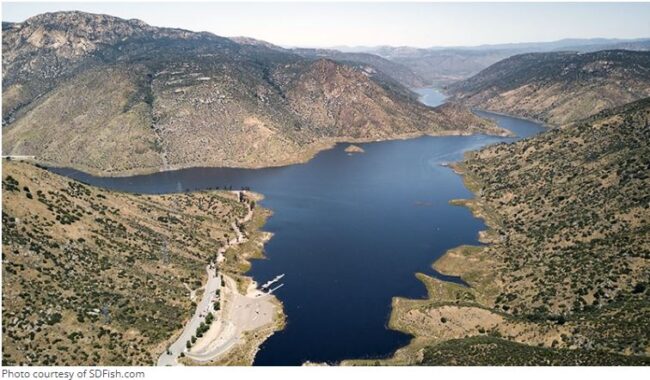 The May tournament participants have been paired up.

Lake opens 1/2 an hour before sunrise

3pm weigh in, in the parking lot

Welcome to the start of the 2022-23 season.  The beautiful Lake Pyramid is the host of our first tournament of the year, being held on April 30th, 2022. 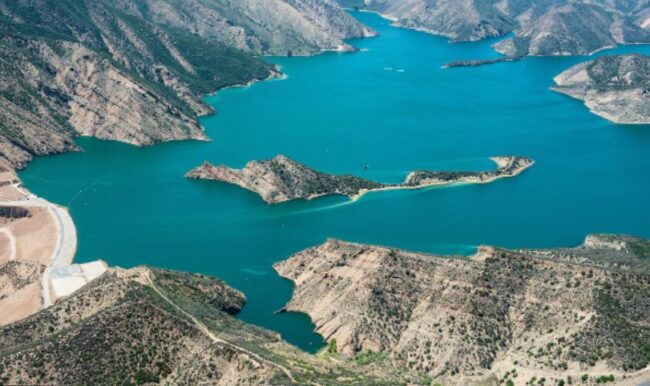 Be prepared for a very thorough quagga inspection at the gate.

$25 for launch and parking, including 2 anglers

Just a reminder that April’s meeting is being held one week later to accommodate the anglers participating in the Delta->Havasu trip.  New date is April 13, 2020.

We will be collecting membership dues at this meeting.

CONGRATULATIONS to Conrad Apodaca Jr for winning this year’s Angler of the Year award!  Conrad Jr paved the way to his club leading 5th AOY award with 8 Top 3 finishes and 3 Big Fish awards this year.

Man, this guy can catch fish! 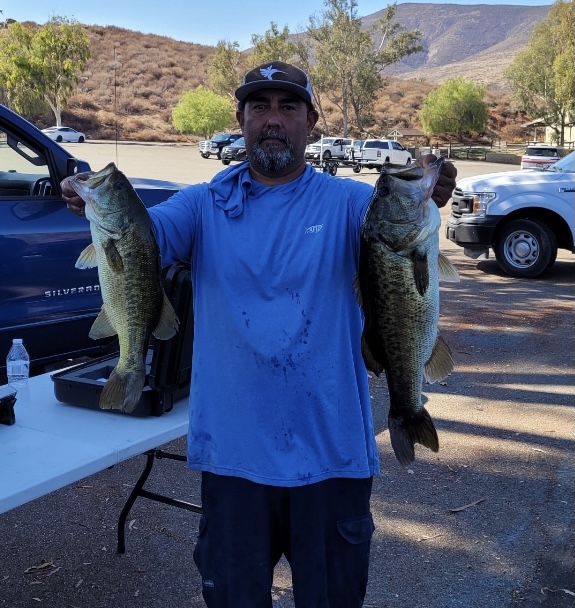 Congratulations are also being extended to the rest of the Top 10 warriors.  You are all eligible for participation in next months Top 10 Shootout.

I am delivering this message on behalf of the CBC board for details on Havasu two day Team tournament.

Please launch safely and wait for your number to be called in order of the draw day one. Day two reverse order no later than than 6:30 from out front of the launch area.

This is a Team Tournament format. Bring your best five fish limit per team to the weigh-in. The $40 tournament fee per person will be collected for all participants including guests. Saturday afternoonbarbecue hosted by CBC location TBA. FYI the non boater fee is $110 plus half of the launching fees for both days paid directly to the boater regardless if you traveled together or separately. Half of the camping or lodging fees only if both anglers stay together.

TEAM FORMAT TOURNAMENT: Non active members and guest applicants are allowed to compete for prizes and awards in the team tournament format events due to the fact that your fish are shared weight with your team partner. The eligible guest angler MUST pay the regular member tournament fee to be eligible for prizes and awards. The Big Boat prize will be awarded to the team in first place. Both members in a team format will be awarded points as in a regular draw tournament. Non active members and guest applicant anglers have the choice to fish for the regular guest fee of eleven (11) tokens for a one day event or seventeen (17) tokens for a two day event. If an angler who is eligible to fish for the guest fee only chooses to enter at the reduced fee, they will not be awarded for placing or Big Fish award. This declaration MUST be made prior to launching by notifying the Tournament Director or Treasurer. If the Tournament Director or Treasurer is NOT notified the angler MUST pay the regular member tournament fee.

If I have missed any Havasu anglers on this email please forward them the information. Thanks.