Today 18 Bass Contenders merged on to the Inland Empires busiest lake for the day. Lake Perris was host to over 30 boats from American Bass and another 9 boats from the California Bass Contenders. With the low water levels and not much structure to hold on, the fish were scattered and tattered all day long with pressure from derby day anglers and pressure from practice day aficionado’s. Those fish were like…. “Really”? One big bucket mouth said… “I’m just sayin”!

As you can see from the photo above, “The Secret Spot” wasn’t very secret on this cloudy Saturday.

Once again to nobody’s suprise Alfred “The Assassin” Vasquez found a way to win even if it was with only one legal keeper. Alfred tamed the hungry giant early around 7:00 near the Island with his Shimano Crucial swimbait bait rod and a Shimano Curado 300 with 16lb Sniper florocarbon tipped with a 9″ Jerry Rago Soft Tool Swimbait. 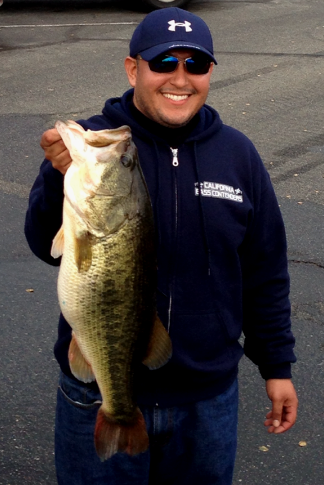 When I spoke to Alfred he told me he and Dave were cracking up about some funny stuff when all of the sudden he was caught off guard as the behemoth slug ripped the rod right out of his hands. He barely gripped the rod in time to start cranking with a locked down drag as the big girl finally showed herself a few feet away from the boat with her mouth wide open shaking her big ugly pit bull head from side to side. Alfred new he couldn’t let her turn her head because the 16lb test line Sniper Florocarbon that would have been no match for this fat girl who wanted to dance… Well Alfred took her to the prom and introduced her to his little friends at the weigh in.

According to a couple other CBC anglers it seems that the fish would chew every time the wind would would pick up a little bit. The bulk of the days fish were mostly short of the 15″ minimum keeper length. Guys throwing drop shot plastics, carolina rigged creature baits and bama riggs were among the anglers who brought fish to the weigh in.

The tale of the tape Lake Perris results:

One note worthy detail that arised from one of the Russian Basscontender contestants on this cold winter day was the exceptional day had with long time member “Smokin Joe Nava”. It was rumored by the boat operator that Joe didn’t pass gas not even once…. well us longtime veteran members all know Joe is king of the SBD.

Next up for the Basscontenders is Lake Otay way down south near the border. Should be a good one!

“Speak your mind” and comment below so we losers who weren’t there can hear from those of you who were!