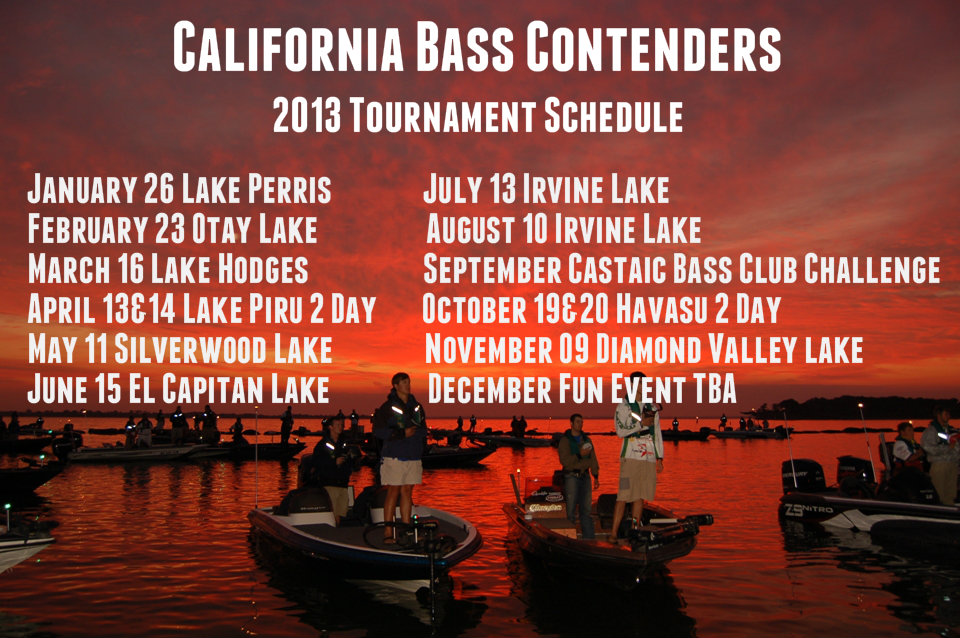 The 2013 new year at California Bass Contenders starts off with a bang at Lake Perris and only keeps on getting better as we wind down the current season and get ready to start a new season of Basscontenders in April. We all know that the San Diego lakes always spawn sooner than LA lakes. So in Feb & March 2013 we will be right on the action at Otay and Hodges as we get it in gear and fish SD lakes at the right time of the season. Our ‘season opener’ and Top Ten Tournament will find its way to Lake Piru in the middle of April where the men once again begin to seperate from the boys.

A hop, skip and a jump to Silverwood, El Cap, Irvine at dusk in the summer and Havasu in October leads way to DVL in November.

In September 2013 the Bass Contenders will hold its monthly tournament at Lake Castaic as it joins in the fun at the Annual Castaic Bass Club Challenge where we will fish our tournament within their tournament. In September 2012 nine different clubs showed up and over 56 boats total from all over Southern California showed up to fish at Castaic Lake as they represented their club. The top three bag limits compete against the top three bags from all of the other clubs and a winner is crowned. This event ended up being one of the biggest tournaments to be held in recent history at Castaic Lake. There hasn’t been a 50-boat field since the late 70’s early 80’s on any of the local lakes.  Top honors for the day went something like this in 4th place California Bass Contenders 26.33#’s, 3rd place Bass’n Buddies with 26.67#’s. 2nd place fell to Ventura County Bass club with 26.99#’s and 1st place with a total of 28.21#’s was the Castaic Bass Club.

See you all at the next monthly meeting!