After traveling almost three hours on south bound California Interstate freeways, The California Bass Contenders converged down south in the clash of the Angler Of The Year point standings as eleven boats and twenty two anglers competed in the “Battle At The Border” at Lower Otay Reservoir. If we had followed our GPS coordinates another two miles in the wrong direction we would have been needing to clear U.S. Customs with some muy grande mouth green pescados.

The United States border patrol was out in force by land, air and even on the lake in a little brown john boat. It was a close call as we almost lost one of our Bass Contender brothers on the water… me!  As the little brown John boat approached our vessel the border patrol guy ask me for my papers as he said… “Hey Where was you born?”… I flashed my green card that I bought in the parking lot at Baldwin Park Walmart and the immigration official moved on his way after inspecting my papers. I even saw him give Randy Estrada a double look but after seeing Paul Herber on the back of the boat he kept putting away.

The morning was clear and cold as twenty two anglers made their way in line near the entrance to Otay lake. Approx 5:45am the park ranger rolled up and told the first team you guys are good to go. The line moved in to position at the launch ramp and the California Bass Contenders were off with boats traveling out in different directions and expectations at a high level. Several limits came to the weigh-in but for the most part it was a tough day on the water. 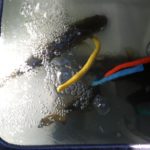 Congatulations to Smokin Joe Vermilyer for claiming top spot in the “Battle At The Border” along with the Big Fish of the tournament at 2.89lbs. A big Bass Contender shout out to his partner and club President Bill Layne for 3rd place finish and combining for Big Boat honors with a total of 19.40lbs.

The Tale Of The Tape:

The California Bass Contenders want to wish a warm welcome to yesterday’s angler guests. We had the privilege of meeting for the first time Aida who is the lovely Girlfriend of original founding member Ted Romero.  Aida showed up to fish with her game face on and would have no doubt won the best looking angler on the lake with her partner Ted coming in a close second. This was Aida’s first ever day on the lake fishing for bass. She fished all day long for eight hours and when I asked her if she had a fun day she said, “It was awesome. I loved being out on the water and I can’t wait to do it again soon”. Sounds like a good keeper Ted. Also we welcome first time bass angler Matt Martin who is a boat mechanic at Pro Boats in San Dimas. Matt fished with Basscontender Gregg Springman from Team Tracker. Last and certainly not least we met angler Kyle Perry from Oklahoma who found his way to Otay through founding member and Father of the club Gabby Hayes. Kyle aka Cal fished with longtime Basscontender Ron Janke. We hope you all keep coming back and join us at our regular club meetings.

Well guys please sound off and “Speak Your Mind”. Simply fill out the section below and tell us how you did it. We want to hear the techniques that caught the fish for all anglers from the top to bottom of the leaderboard. Pleaese let us know what plastic, color, depth you fished below.

Next up we have Hodges on March 16th with a variance for fish length and bag limit.

See you on the water; Big Ed!