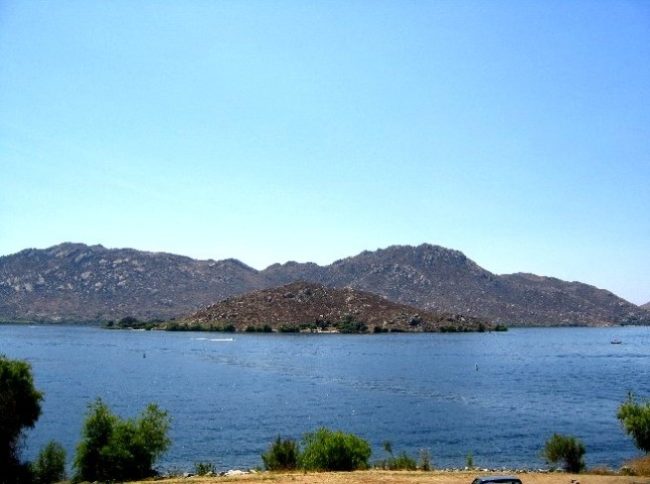 Saturday July 13th 2013 was the day where 15 two man teams would come together in MorenoValley for the showdown at Perris. Twenty eight California Bass Contenders would tangle in a heavy weight bout for nine rounds of Championship boxing versus the free swimming Lobina’s from the depths of the clear waters at Lake Perris SRA. No holds barred was the rule and only one team would be named Champion of the “Showdown at Perris”. Ding, ding the bell rang as 28 anglers set out  in 99 degree weather in different directions. Included in the flight of 28 anglers were first time guests Mike Holden fishing with our club Prez Bill Layne and Sergio Trujillo who fished with our Secretary Frankie ‘C’. Also returning as guests were good friends to the club Gil Bowman and Brian Reeves. We hope you guys enjoyed fishing with the Basscontenders and get the itch to do it again. Special little Basscontender shout out to new guest from the High Desert Chris Fealy who was the first non boater guest to be selected in the draw for Perris. Unfortunatly for Chris his boater was unable to make it due to personal circumstances.

Everybody met up at McDonalds for a fine lunch and a quick board meeting at 1:00PM. Thats when the fun started, a little bit of smack talking and alot of good conversation about the days event was the normal. There was alot of eye candy in the area as the hot summer temps brought out the finest in appearel. After devouring our lunch and choosing lakes for 2014 season we all made our way to the entrance at Perris where we conducted our pre tournament meeting. We handed out variance slips and marked our boats and vehicles with identifying tags that would allow us to stay on the water after the general public was required to vacate.

The lake shared her splendor as the wind was blowing from the west approx 10-20mph and was relentless if you fished on the main lake. On the brighter side of the weather for those who fished the east end where they were treated to calm conditions for most of the afternoon with water temps in the low 80’s which was five to six degrees warmer than the west end. My partner Joe ‘V’ and I wondered if the trolling motor would hold up as we fished in the wind all afternoon on an offshore spot along with the fine company of several other members in their boats. Once the sun had set down for the evening the wind backed off as we were treated to a beautiful summer evening on the water. The small slice of moon was just enough for you to see in the dark.

After the dust settled we all made our way back to Lot# 5 at 10:00PM for the weigh in. It was a beautiful sight to see everybody in the dark as their bow and stern lights lit up the lake from one end to the other. The quiet solitude of having the whole lake to ourselves after 6:30PM was awesome. Some guys caught ‘em good and some guys struggled. For the team of Big Ed & Joe ‘V’ in the Blue Champion we had a decent bite on eager willing fish but the size was our problem. We could not get our prefish quality to cooperate. We did manage to have an outstanding time as we laughed about many things during our time on the water. That is the best part of fishing in this club. The friends you make along the way sharing time as you try to ‘one up’ the next guy in the boat next to you. We made fun of the anglers who were around us (sorry Mark & Derek) and we made fun of each other. That is what it’s all about, as we caught fish consistently all afternoon!

Congratulations to the winning team of Dr Randy Estrada & Paul Herber for the winning weight of 9.14lbs and Big Fish award with a 4.13 kicker. Dr Randy & Paul also took home the side pot as winner take all in this team event format. Randy and Paul sound off and tell us “how u did it”? 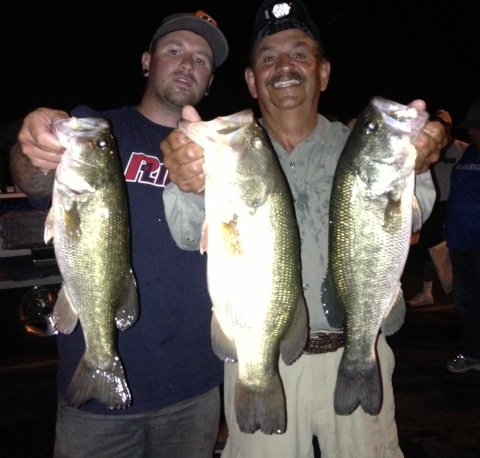 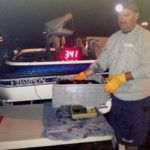 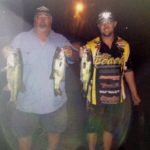 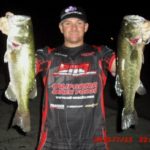 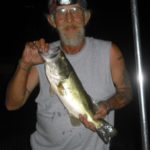 Sound off below guys and tell us how you caught em. Simply fill out your name and email in the box below and post your report for the Basscontender brothers. Your email will NOT show once your reply has been submitted.